How does gallbladder cancer?

Symptoms of gallbladder cancer begin to appear most often due to obstruction or overlapping of the bile ducts. While in the later stages of the disease symptoms inherent in any tumors in the body.

Pain cancer of the gallbladder

The most common problem that occurs in the gallbladder cholelithiasis. It is accompanied by regular painful attacks. In the formation of a tumor in the gallbladder the character of the pain changes. The intervals of good health between the attacks become shorter and disappear completely. The pain is constant and persistent, informed, effective means cease to help. Such complaints are the patient specific reason for the additional survey on the nodule. 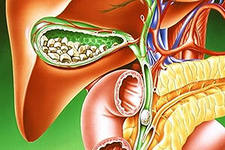 If cholelithiasis was not, and in the right Podhradie region there is pain, accompanied by dyspeptic phenomena, decrease of appetite, especially in older people, screening for the presence of a tumor needs to be faster.

The character of the pain may be different, often it masquerades as biliary colic, but may be just vague pain in the gall bladder, in which there are no other manifestations of the disease. Abdominal pain can radiate to the upper back, and, in the region of the gallbladder such pain can not be felt. This symptom often leads to the loss of time since diagnosis because it is difficult. 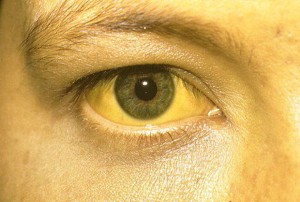 About half of the cases of gallbladder cancer accompanied by obstructive (mechanical) jaundice. This is a sign that is visible to the naked eye, it changes the appearance of the patient: the whites of the eyes turn yellow, skin color becomes yellow, the characteristic yellow color becomes the mucous membrane under the tongue.

Jaundice is caused by the germination of tumors in biliary tract and cessation of normal movement of bile. In the blood increases the content of bilirubin, which leads to staining of the tissues. Jaundice often appears before the appearance of pain and gradually increasing, getting dirty-green tint. Often it is accompanied by pruritus.

Why an increasing belly?

Large tumor size, of course, can cause enlargement of the abdomen, but this happens very rarely. Only a quarter of cases, the tumor in the gall bladder is palpated. Usually it is not painful dense formation. Often in response to processes in the gallbladder increase the liver and spleen. And he also increases the gallbladder, but not so much at the expense of the tumor as due to the accumulated bile, when bile ducts are overlapped. The growth of the tumor towards the liver causing its increase.

As a result of all these processes in humans, increased abdominal circumference with total weight loss. In the later stages of the disease often occurs ascites (accumulation of abdominal fluid).

Again about the General symptoms

title="temperature rises" alt="fever ">Nausea and vomiting often accompany cancer. The tumor secretes waste products that poison the body. Yes and disruption of the biliary adds good health to the patient.

The temperature rises when the cancer tumors during their active growth, or it may be due to the so-called cancer fever. The body tries to fight the tumor, therefore, develops an inflammatory process, accompanied by rise of temperature.

One of the common causes of death of cancer patients depletion and strong loss of weight. Cancer of the gallbladder on a certain stage leads to the loss of body weight, which could begin even before lost appetite. The patient may eat normally, but metabolic processes are going it is very fast, the disease takes a lot of energy, and the body is unable to replenish its supplies.

In conclusion, let me summarize the above and make some conclusions about when to worry about cancer of the gallbladder. If you feel that something is amiss, contact your doctor as soon as possible.

There is a possibility of gall bladder cancer if:

Not necessarily these symptoms will occur simultaneously. Enough and some one to pass the examination. Better to be an alarmist and find out what cancer you have, than to detect a malignant tumor when it's too late to do anything.