What are the neuroendocrine carcinomas?

Carcinoma of the cervix: symptoms and prognosis

One of the most terrible diseases in women is cancer of the cervix or carcinoma. The cervix connects the uterus with the vagina. In most cases, cervical carcinoma develops as a consequence of infection with oncogenic types of human papillomavirus (HPV). Infection occurs most often through sexual contact. The immune system of most women is able to suppress the virus.

But, some of the women, the virus can survive in the female tract and cause physiological transformation of the cells of the cervix into cancer cells. For this reason, doctors recommend regular checks by a gynecologist in order to reduce the risk of developing carcinoma of the cervix.

Worldwide cervical carcinoma is the second most common abnormal malignant disease, with the result that every year there is about 500 000 new cases, for this reason, the prognosis of carcinoma of the cervix is not comforting half of all cases are fatal.

Most patients do not experience any symptoms associated with a disease because early symptoms of cervical cancer do not occur or are insignificant. Conventionally, the signs of carcinoma of the cervix can be divided into primary and secondary.

The first symptoms of cervical cancer are:

Patients can often ignore discharge from the uterus, thinking that the beginning of menstruation. Sometimes, heavy vaginal bleeding may require emergency hospitalization.

Late symptoms of carcinoma of the cervix:

In the later stages of the disease patients developing pelvic discomfort or pain. If you are experiencing symptoms of carcinoma of the cervix, you should immediately consult a doctor.

The types of cells that are capable of mutation, determine the histological type of cervical cancer. What kind of diagnosis will determine the type of cancer it is very important for every doctor, because it allows you to choose the appropriate treatment condition and prognosis.

The main types of cancer:

Sometimes both types occur simultaneously, but most often it is diagnosed squamous cell carcinoma of the cervix, which has two forms: invasive and microinvasive. 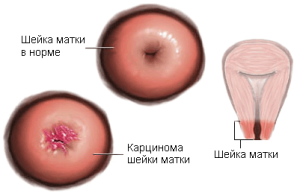 Squamous cell type of the disease diagnosed using microscopic examination, and detected in 92% of cases.

The main risk factors are the following:

Invasive carcinoma of the cervix widespread unlike micro-invasive. Observed at the time of menopause (47-55 years) and takes the lives of many women in the Prime of life.

Remember that cervical cancer can be cured if you take care of your health and take place 2 times per year professional examination by a gynecologist.

For suspected carcinoma of the uterine cervixbiopsy, which will help to identify the complexity of the resettlement of abnormal cells. While this study is taken small tumor tissue in order to study it more carefully. When such a diagnosis, the specialists identify two types of cervical cancer: oragami and neurogenesis.

Besides, probably many people have heard the term as a moderate differentiated carcinoma of the cervix, which will be discussed separately.

Moderate differentiated carcinoma of the cervix

Cancer! What a terrible word, taking away from the lives of many people. Varieties of this disease are very many, and none can guarantee the life of the patient. Unfortunately, moderate differentiated carcinoma of the cervix is also not an exception.

The disease affects many women, and the worst thing is that the first symptoms are almost invisible, but their rate of development is simply amazing that a woman does not have time to recover.

Treatment depends on several factors, including histological type, presence of other diseases and personal preferences to the choice of treatment.

The main ones include the following procedures:

Preventive measures include limiting the number of sexual partners, using condoms, quitting Smoking and regular checkups at the doctor.