All there is to know about carcinoma of the lung

A disease such as carcinoma of the lung refers to a group of malignant tumors of the lung tissues. Such tumors arise from the cells that line the bronchi and lungs. The features of these tumors include rapid growth and rapid metastasis. While in men this disease occurs almost 10 times more often than the female. And the number of patients increases in proportion with the age of the people. So, men aged 60 to 69 years the incidence of lung cancer 60 times higher than that of a male aged 30-40 years. If to speak directly about Russia, here such type of cancer is the most common. However, the greatest number of deaths from lung carcinoma is recorded in countries such as Scotland, the UK and Luxembourg. But in Syria, El Salvador or Brazil, this disease almost never occurs.

What are the causes and symptoms?

The first thing is to talk about the factors that predispose to carcinoma of this organ. Of course, as has long been known, mainly this is caused by Smoking. And it happens for the reason that cigarette smoke contains about sixty different carcinogens. Non-smokers get these carcinogens due to passive Smoking. However, apart from cigarettes there are still other reasons to develop this type of cancer, namely:

Now it is necessary to say a few words about the symptoms inherent in the carcinoma of the lung. Of course, manifestations of the disease will depend on the stage of the carcinoma of the lung, but there are some common symptoms. It is worth to say that the first is an asymptomatic period after the initial stages, the disease does not manifest itself very often people are not even aware of it. Next, the patient noticed some shortness of breath, crackling voice and a cough. And then he meets with such cases:

What are the different types? 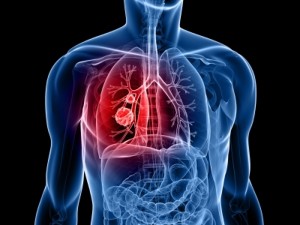 So, the first thing you need to say that there is small cell carcinoma of the lung (SCLC) and non-small cell carcinoma of the body(NSCLC). These types are based on the nature of the tumor cells. It is essential to differentiate these two types of cancer, because each of them is assigned a special treatment. At the same time, the first type, namely SCLC is found in 20% cases of all malignant diseases of the lungs. However, he and Sami are aggressive and fast. In 99% of cases it develops in people who smoke. Also the tumor is very quickly spreading metastases throughout the body. And in most cases found already in the common form.

If to speak about non-small cell lung cancer of this body, that is to say that it is the most common, and it is diagnosed in 80% of all lung tumors. At the same time this cancer is divided into 3 subspecies depending on the names of its cells. You'll find most of adenocarcinoma, in particular they occur in 50% of cases. The tumor can oftento develop in non-smokers and it is formed in peripheral tissues of the body. There are also squamous cell cancer, which takes 30 percent of all cases of NSCLC. These cells have been developing in the Central part of the chest. A very rare large-cell carcinoma is a carcinoma or undifferentiated carcinoma. In addition, there can be combined types of tumors.

In addition, rarely can develop bronchial carcinoma, which falls about 5% of all cases. Often, when the detection of the tumor is small in size and often it can be found in young people.

This tumor is not associated with Smoking, and it has the ability to metastasize. Fortunately, the prognosis of carcinoma of the lung such type is a positive.

What are the stages?

Mainly carcinoma of the body are divided into stages according to the TNM system, namely depending on the presence or absence of metastases and in accordance with the degree of involvement in cancer of the lymph nodes. The importance and size of the malignant tumors. Thus, a network of four stages of such tumours, in particular:

Thus, it is best to take preventive measures in order to prevent the development of this terrible disease. In particular the need to completely give up tobacco, to exclude the possibility of passive Smoking. In addition, you need to try not to contact with different kinds of carcinogenic substances, such as radon, asbestos, arsenic, chlorine, etc. Alcohol also increases the risk of developing the disease. You need to enter in your diet eating large quantities of apples.