Home / Melanoma / How to diagnose melanoma?

How to diagnose melanoma?

Melanoma is called a malignant tumor that develops from melanocytes – pigment cells. This tumor most often appears on the skin, at least – in the retina, oral cavity, rectum and other mucous membranes.

Melanoma is a very aggressive tumor that metastasizes as lymphogenous and hematogenous route. Metastasi melanoma can appear in any organ, after which a cure is unlikely. Most development of melanoma are those with white skin, blond hair and blue eyes. The age of 50 years is also a factor that increases the risk of developing melanoma. Men affected more than women. Early diagnosis of melanoma can significantly improve the patient's chances of recovery.

You should closely monitor all available on the body with a mole (congenital and acquired), and birthmarks. Upon the slightest suspicion of abnormal behavior of a mole should consult a dermatologist or oncologist. 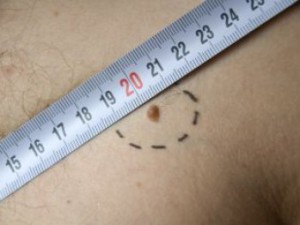 Abnormal behavior of the mole is considered:

Diagnosis of melanoma at an early stage is impossible without Dermoscopy – the examination of moles by a doctor with a magnifying glass or special microscope. Whether the mole is suspicious, the doctor will determine by the following criteria: asymmetry of the mole, the presence of jagged edges, change colors of different parts of a mole, the size of more than 6 mm.

The final diagnosis can only be made after histological analysis of tumor tissues. The melanoma is removed surgically along with the surrounding healthy tissues.

Biopsy in the diagnosis of melanoma is not possible to prevent the spread of the tumor.

If the doctor suspects the patient have a melanoma, he conducts a more thorough examination: in addition to the inspection is assigned to the chest x-ray, checks the operation of the liver, undergo bone scan and brain. To determine the presence of metastases in organs and lymph nodes are used scintigraphy and computed tomography.

Modern methods of diagnosis of melanoma allow you to quite accurately determine the stage of the malignant process, which will depend largely on the patient's chance for survival. There are such stages of melanoma: 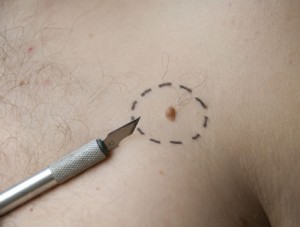 In the diagnosis of the first or second stages of melanoma is surgical treatment of melanoma: from the retreating edge of the tumor at least 1 cm with a tumor thickness up to 1 mm and less than 2 cm at a thickness of 1 to 2 mm. a Malignant tumor excised together with subcutaneous fat and fascia.

At the fourth stage are applied to the surgical technique, chemotherapy and radiotherapy. Also symptomatic drug therapy.

At the first stages of melanoma the increased five-year survival rate is 97%, and ten-year – 95%. Such a result can be achieved only if timely treatment to the doctor at the first symptoms of melanoma, and appropriate (most often surgical) treatment.

In the second stage of melanoma five-year survival is 81% and the ten-year – 67%. At the third stage, five-year survival is 59% and ten years – 43%. In the fourth stage a chance to stay alive for 5 years is only 20% of patients and within 10 years – 10%. The average life expectancy with stage IV melanoma is only 6 months.

Prognosis worsens with increasing age. Also the forecast can affect the color of the skin in dark-skinned people, melanoma develops less frequently, but often causes death. Also, the prognosis depends on the location of melanoma: if it appears under the nails, on the soles or palms, the prognosis is much worse.