Home / Melanoma / How to treat melanoma on the head?

Such aggressive malignancy like melanoma can occur on the skin of any part of the body. Melanoma often appears on the face or scalp. 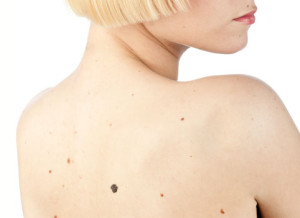 Melanoma starts growing from skin cells and tends to quickly metastasize (even if the tumor is of small size), and then to cure it becomes very difficult (metastases affect the brain, bones and lungs). However, to prevent the development of melanoma much easier than other types of cancer. For this you need to closely monitor all available on the body of age spots and moles, and to go to the doctor at the slightest change them. Particularly easy prevented melanoma on the face.

Melanoma most often appear in people aged 15 to 40 years. Melanoma very rarely develops before puberty, therefore predisposing to its development factor is the violation of hormonal background.

Melanoma ranks second in mortality among women and sixth among men. In men, melanoma most often appears on the back, and in women, melanoma is often found on the lower leg. Especially dangerous is the melanoma on the head under the hair (after all, the time to identify a strange change in the pigmentation of the skin under the hair of the person is often not able).

As there is melanoma?

Melanoma comes from skin cells that synthesize pigment the skin in the sun, as well as giving the dark shade of the freckles, moles and birthmarks. These cells are called melanocytes.

Melanoma of the scalp, face, or other parts of the body may be suspected if a mole, freckle or birthmark steel is evenly colored, if you change their shape or border.

The appearance of melanoma is directly related to solar radiation. Also predispose to the development of melanoma such factors as the presence of the body of a large number of freckles or moles. People with fair sensitive skin prone to melanomas more than all the rest.

The features that distinguish melanoma from benign tumors, include:

If you experience any of the following symptoms you need to consult a dermatologist or oncologist for further testing. Timely treatment to the doctor in this case could save a life. 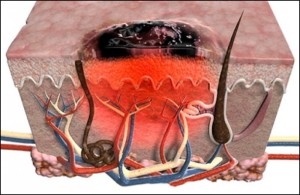 There are several types of melanoma:

The most common is superficial melanoma. It is not much protrudes above the surface of the skin and its easily confused with a mole or birthmark.

Knotty melanoma occurs in a quarter of cases of melanoma. It looks raised above the skin a dark brown burl. Sizes knotty melanoma may be different.

Subungual melanoma occurs in 10% of cases of melanoma. Most often it is localized under the nail plates of the toes.

Melanoma lentigo melanoma of the skin of the face or neck. It occurs mainly in older people.

treatment">cure for melanoma depends on the stage of the malignant process. Most often melanoma is removed under local anesthesia. Sometimes after surgical treatment prescribed chemotherapy or radiotherapy.

Melanoma excised, departing from the edges of 5-7 cm Flap of skin with the melanoma is removed along with subcutaneous fat. Melanoma of the skin excised with a smaller indent that can threaten relapse. If a melanoma appeared on her finger, then recommended its amputation.

Because of the peculiarities of the anatomical structure, melanoma on the nose or on the lip is quite difficult surgical treatment. In this case, to preserve the aesthetic appearance is gradual removal of the tissue under a microscope. Later can be performed the reconstruction operation.

The appearance of metastases greatly reduces a patient's chances of survival. So seek medical need in the appearance of the first suspicious symptoms, do not delay visit to the doctor.

Often people infected with melanoma, go to the doctor too late because they do not know the difference between healthy and patient mole, or do not give these signs a serious matter. In order to avoid the development of melanoma, it is necessary to explore the main signs of melanoma and closely monitor all of your moles.

If by occupation you often have to spend time in the sun, use sunscreen and wear clothes, as protecting the skin from ultraviolet radiation. During lunch hours it is best not to walk in the sun.

Melanoma on the lip or on the nose can be prevented by yourself (you need to consult a dermatologist at the first sign of color change of the boundaries or size of the moles). But the melanoma on the head or on the back can go unnoticed. So do not hesitate – to ask relatives or close friends to regularly examine your back and scalp, if there are spots or moles.

A good way to prevent melanoma is considered mole removal before they will begin the malignant process. It is recommended to prevent melanoma moles removed, located on the feet, soles, nail bed, and any other parts of the body where they with high probability can be injured (about 40% of melanoma appears after injury moles).