Metastases are defined as secondary centers of growth of malignant tumors. Most of these tumors at a certain stage of its development begins to metastasize. The speed of this process determines the prognosis and results of treatment.

How quickly spread metastases depends on many factors.

The reasons for the development of metastases

The main reason in the character of malignant tumors. Even one break away from the neoplasm cell is able to give a secondary focus. Cancer cells start to share, and as soon as a sufficient number of them, forming a new tumor, microscopic at first.

Research, skid malignant cells in organs does not necessarily lead to the emergence of metastases. With good tissue resistance and strong protective properties of the body, tumor cells may remain viable but not grow and do not form a new tumor.

Disseminated metastases in several ways. "Released" from the parent source cells in blood and lymphatic vessels fall into different organs and systems. Perhaps the distribution of these cells inside the body cavities. In the beginning this process is slow or even "dormant". The body with the immune system protects itself from danger, but its capabilities sooner or later. Moreover, a primary tumor inhibits the development of metastases, while they consist of a small number of cells.

Some of the features of metastasis 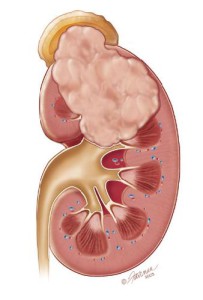 Development of metastasis is usually different in men and women. The most common cause of metastases in women becoming the primary tumor:

The cause of secondary lesions in males in most cases are cancerous processes:

According to statistics less often metastases develop on the skin, most often in the skeletal system. Particularly susceptible to the formation of secondary tumors of the hip joint. Metastases could be a result of malignancy of any localization. Bones affects the two types of metastasis:

One of the main manifestations of the presence in the organism of secondary foci of tumor pain appearing at a certain stage of their lives. The pain gradually increases. This is due to the constant stimulation of nerve endings located near the foci of metastasis. Changes in blood and bone.

The speed of propagation of metastases

According to the modern theory of cancer the metastases are formed in the very early stages of the primary tumor. The fact that the cancerous growths have such a feature that the cells are easily separated from them. Perhaps the very rapid emergence of new formations after the formation of the primary tumor. It is possible that metastases will appear only a few years. Latent metastases are felt years after treatment.

The spread of metastases depends on the following factors:

It is noticed that vysokomehanizirovannoe tumors metastasize less frequently, later and more slowly than poorly differentiated tumors. The smaller secondary focus, the slower it grows. Upon reaching a certain size induces the production of specific substances that are growth factors of the tumor, and the processconsiderably accelerated.

Usually, the development of metastases occurs when the organism have depleted protective reserves.

More often, however, young people suffer more from the formation of secondary lesions, and metastases have spread much faster, than patients of middle and old age. Perhaps this is due to greater activity of the vital processes in a young body in which to develop not only healthy tissue, but a malignant tumor.

Some people have cancer processes are very fast without the due bases on that. It happens that have not yet been diagnosed with a primary tumor and already formed numerous metastases. When a negative psychological attitude, lack of desire to fight and live is rarely possible favorable prognosis, and treatment may be unsuccessful, despite the potential of modern medicine.