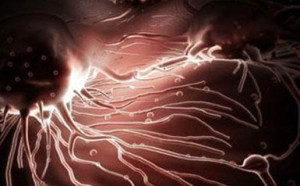 Metastases are secondary foci of malignant tumors. Most of these tumors, also called cancer, lead to relapse and emergence of secondary foci. Often there are metastases after surgery, during which the main tumor was removed. The main reason for this nature of malignant neoplasms.

A malignant tumor is arranged so that its cells at a certain stage of development come off and can move around the body through blood and lymph. In the place where he stayed at least one cell, and starts the growth of new, secondary tumors, i.e. metastases. The smaller the tumor, the less aggressive it behaves. When it becomes more amplified and accelerated its growth. From the number of cells in the locus depends on the number of substances that are growth factors, as they are allocated in every cell. These specific substances (growth factors) stimulate the formation of vascular capillary network around the cells in the primary tumor or metastasis. The new vessels contribute to the delivery of nutrients, which ensures the growth of the tumor, however, this is at the expense of healthy tissue.

Metastases can be formed quite slowly and some years not manifest itself. Trigger mechanisms of the growth processes of tumor cells are still unclear, therefore, to predict the development and the number of metastases is not possible.

Time before clinical manifestations of the metastasis depends on:

Where there are metastases?

The place of formation of secondary tumors more likely depends on the type of cancer and localization of the primary tumor.

What is the danger of metastasis?

It is the metastases ultimately lead to the death of cancer patients. The body needs a lot of strength to fight the tumor. In turn, it really disrupts, since it emits a lot of harmful substances, some of which are products of its activity. The same processes cause the metastases, they drain the body to the same cause deterioration of the General condition and severe pain.

Why detectable metastases after surgery?

Surgical removal of the tumor affected organ or it part is the basic method in the treatment of malignant tumors. However, detection of metastases after removal of the tumor happens quite often. The main reason for this is that surgery removes only the tumor, and the cause of its formation remains, also remain detached from her cell. They become the beginning of a new foci of tumors.

The development of metastases is often slow, while the parent (primary) tumor is in the right place. It suppresses the growth of secondary lesions. After removal of the primary tumor have nothing preventing metastases develop, the cells begin to divide with increasing speed.

How to stop the growth of metastases?

With additional treatment, the frequency of metastasis after surgery is greatly reduced. Also it is possible to reduce the speed of spread of metastases and to delay negativethe consequences for several years.