Metastases in the head — possible problems

Metastasis is called a secondary pathological process, which occurs by moving the tumor cells or microorganisms from a primary tumor of the disease to other parts of the body via the blood or lymphatic vessels. As well so they can move inside the body cavity. The process in which the formation of metastases, is called metastasis. Mostly this concept is used to refer to malignant tumors, but a purulent inflammation in sepsis, or a number of other processes in rare cases, gets the same name.

That can metastasize to the brain?

Most of those brain tumors that are metastatic due to the fact that tumor cells spread via the arterial blood. For this reason, the metastases in the brain are located where blood flow is most intense. So their main location – the border between white and gray matter, and at the junction of the basins of the posterior cerebral artery and middle cerebral artery. Most commonly in the brain and there are metastases of malignant tumors of the lung, both primary and metastatic. In the cerebellum and neurohypophysis often metastasizes breast cancer, as this has been fostered by features of venous blood flow from the chest to the skull.

Except breast cancer and lung cancer metastases to the head can form a malignant tumor of the gastrointestinal tract, and also melanoma, germ cell tumor, thyroid cancer. But ovarian cancer, Hodgkin's disease and prostate cancer metastasize to the brain are quite rare.

How to diagnose metastases of the brain? 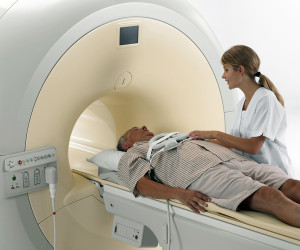 When MRI revealed metastasis in the form of well-bounded substantially circular formations. T-1 weighted image: metastasis in a signal of equal intensity with the normal tissue or the intensity of the signal will be less. T-2 weighted image: metastases appear brighter normal tissue. If you enter the contrast, the metastases are more vivid.
However, the picture of brain metastases is not so specific. If the MRI revealed a ring surrounded by contrast, it is necessary to conduct thorough diagnostics and verify the presence of a number of diseases such as toxoplasmosis, stroke, trauma, hemorrhage, and several others. The same pattern of metastasis on MRI can mimic epileptic seizures, prolonged, causing brain swelling. However, this happens rarely and a couple weeks of anticonvulsant therapy, typically solves this issue.

In case of suspicion of brain metastases is much less benefit you will give a CT scan using contrast. Since it is less sensitive. Besides the cause the beginning of an epileptic seizure. If 10 minutes before the injection of contrast to enter the diazepam, the risk of seizure will be significantly reduced.

How to treat metastases in the brain?

Unfortunately, except for extremely rare cases, malignant tumor metastezirovanii the brain is incurable.

In this case, the goal of therapy becomes improvement in General condition, prolong life and relieve suffering. Clinical studies in such cases as the criteria include life expectancy, not quality, butradiation therapy, corticosteroids, and anticonvulsants help to significantly alleviate the condition in most patients. But the role of surgery or chemotherapy to improve the quality of life is not yet clear.

To ease the symptoms of metastases in the tissues of the brain can high dose of glucocorticoids.

Improvement is typically pronounced, it could come within the next six or twenty-four hours after the injection and hold until the discontinuation of the drug. However, glucocorticoids have cumulative side effects. Therefore, we have to look to more radical methods of treatment, to be able to cancel them.

One third of patients with brain metastases experienced an epileptic seizure, at least one. The detection of supratentorial metastases are assigned to anti-convulsants, basically prophylactic.upon irradiation of the brain receiving phenytoin may cause severe allergic reaction.

Radiation therapy is the main treatment of brain metastases, because in addition to metastases detected by CT and MRI, in the brain there are a large number of microscopic clusters of tumour cells.in controlled studies have proved the benefits of this approach, but did not reveal the relationship between effect and dose. Standard dose taking 30 Grams, divided into 10 or 15 fractions. In order to enhance the effect of large metastases is irradiated additionally. 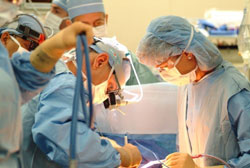 40% of patients with metastases of the brain revealed one three-dimensional education. Solitary metastases are Available for surgical exposure are removed. Metastases are often separated from all surrounding tissues and can be removed without neurological consequences. Additionally, after surgery diminished neurological symptoms. If the metastasis is the only manifestation of the disease, their removal leads to life extension and major improvement of the General condition.

Some tumors that are lichen, breast cancer, germ cell tumors and small cell lung cancer, are sensitive to the effects of anticancer agents. However, metastatic tumors are often less sensitive, but here, hormone therapy and chemotherapy are highly effective.

Metastases to the brain are a consequence of development in the human body, pathological processes caused by microorganisms or tumor cells moving through the body fluids in the brain. They can be caused by certain types of cancer. Cure intracerebral metastases, unfortunately, can not be. All that modern medicine can do is to facilitate the patient's condition and prolong his life.