Home / Fibroids / Interstitial fibroids. What is it?

Interstitial fibroids. What is it? 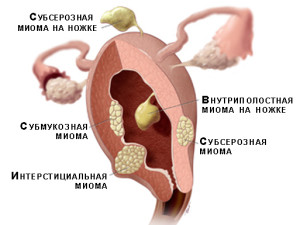 Uterine fibroids are very common women illness. Fibroids has several varieties. Most often, (in 95% of cases) diagnosed interstitial fibroids. This type of benign tumor is localized in the muscular layer, that is inside the uterine muscle. It can be placed in the body of the uterus and in the region of its bottom. In some cases, interstitial myoma does not go beyond the walls of the uterus and in other growing outward and compresses the surrounding organs. Another possible option, when the spread of tumors accounts for the internal cavity of the uterus.

Most often this disease develops in women of childbearing age. Up to half of the female population in the most active period of his life can be affected by this type of uterine fibroids.

Why do I get interstitial fibroids?

The main cause of hormonal changes, or rather, a large number of female hormones. Hormonal balance can be disturbed for various reasons:

These effects lead to the fact that the muscle cells of the uterus begin to divide and form a tumor. As with any other disease interstitial uterine fibroids are easier to treat in the beginning of its development. However, this tumor is very often doesn't manifest itself until, until it reaches a considerable size. Worse to the diagnosis of subserous-interstitial myoma. This is due to the location of the node when it is in the upper layers of the muscles and grows toward the abdominal cavity.

On what grounds to suspect the presence of interstitial fibroids?

When the tumor compresses the vessels in the uterine wall, is disrupted powered on. It's one of the reasons that give rise to painful sensations. This way the body signals the trouble.

The character of pain may vary from constant aching, to short but intense cramping.

If interstitial myoma can change the character of the menstrual discharge. They become very abundant and long. It is also possible and bleeding in between periods. If you do not pay attention to this symptom, it leads to the development of anemia. Due to blood loss is greatly reduced the amount of hemoglobin in the blood of women, which inevitably affects overall health and wellbeing.

Irregularities in the internal organs

With this arrangement, the fibroids when she puts pressure on the internal organs, can disrupt the processes of urination and defecation.

It should be remembered that these symptoms begin to be apparent when a myoma is already large enough, that is neglected and treatment might need surgery.

What are the risks of running interstitial fibroids?

Most often, interstitial myoma diagnosed during a pelvic examination or ultrasound of the pelvic organs. To maintain women's health and the timely detection of problems quite regularly, twice a year, to carry out thesea very simple procedure.