A tumor that has formed beneath the endometrium, that is, under the mucous membrane of the uterus is called a submucosal fibroid. Is a type of benign tumors. A distinctive feature of submucosal fibroids the ability to grow quickly.

What is the submucosal fibroids?

The most common symptom of uterine bleeding. Moreover, their occurrence and profusion does not depend on the size of the node submucous uterine fibroids. These bleeding can coincide with menstruation, but to be more abundant and long. Can be intermenstrual bleeding. You need to go to the doctor if the menstrual cycle has decreased and became less than 21 days or if the duration and amount of discharge increased markedly. The normal duration of bleeding during menstruation is not more than 7 days.

Pain in the lower abdomen often occur during menstruation. Normally this time should not be severe pain. Besides, the pain of cramping nature arise at the birth of submucous node, i.e. at its exit from the uterus. 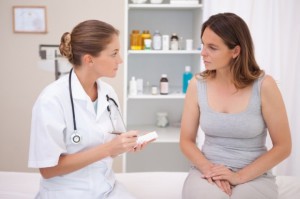 If there is at least one symptom, you should consult a doctor. Definitely need a gynecological examination. Further, as a rule, appointed by hysteroscopy, which allows to detect even the smallest nodes to determine their size and location. There is a more modern method of diagnosis is hydrosonography, which is much easier for patients.

In addition to the examination, hysteroscopy or hydrosonography ultrasound diagnosis and three-dimensional echography.

Accurate diagnosis is very important, as the size, the node status, its location, and the number of nodes affect the choice of method of treatment. In particular, the type and method of operation on dosage and duration of hormone treatment.

There are cases of prolonged asymptomatic course of submucosal fibroids. Lack of explicit manifestations enables the tumor to grow. Sooner or later, the fibroids will manifest itself, there may be such severe bleeding that can help only surgical intervention.

The main treatment is surgical. Submucosal fibroids this is a direct indication for surgery. As an auxiliary treatment prescribed hormone therapy before the surgery and after it.

Surgery can be radical, that is, with the removal of the uterus, and can-conserving. Of course, whenever possible, doctors try to prefer the second option, but it all depends on the size, location and number of units, age and condition of the patient.

If submucous education is not more than 5 cm and located in the uterine cavity, it can be removed using hysteroresectoscopy. When the nodes of larger size can be removed more accessible part of the site with the appointment of hormone therapy. At the end of treatment removed the remaining part of the submucous fibroids. Possible option when the first is carried out hormonal therapy, and after reducing the node switching to surgical treatment, that is, remove the node.

The more regularly a woman presents to a gynecologist for preventive examinations, the more likely "not to grow a myoma.