Signs of brain cancer and its treatment

Brain cancer is rare in former times, the disease, the cases which in recent decades has increased considerably. Before brain cancer was an incurable disease, as there were no methods of diagnostics, allowing to identify the disease at an early stage and no treatment methods to get rid of brain tumor and leaves the patient chances of survival.

Treated cancers of the brain, given all the advances of modern medicine? Yes, but not in all cases: the prognosis of brain cancer is in 1st stage – favorable, 2-stage – have a chance to heal. On the 3rd stage, the probability of cure is very low (it's only a few succeed), but can extend life by chemotherapy and radiotherapy. On the 4th stage of cancer of the brain, it is only on palliative medicine. Although in recent years the press started to emerge news about the success of a new experimental treatment of brain cancer with stem cells, testing on volunteers. If this is confirmed, then soon people with 4th stage brain cancer will be more likely to survive.

Common causes of cancer, any type of the researchers attributed the unfavorable ecological situation, bad habits and heredity. But, in this regard, it remains unclear why developing brain cancer in children (according to statistics, in children the incidence of brain cancer at the 2nd place, 1st place is a cancer of the blood). 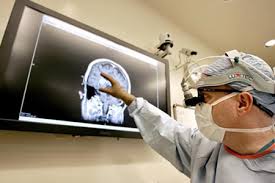 The causes of brain cancer may be involved in a concussion or a skull fracture (a cancer of the brain indicate that prior to the detection of the disease they suffered a severe blow to the head). However, the vast majority of people who have suffered a concussion, brain cancer does not develop.

Some researchers point to a possible involvement in the development and increase of cases of cancer of the brain factors such as radiation from household devices (e.g. microwave ovens), mobile phones and power lines. The incidence of brain cancer associated with exposure to substances such as sugar substitute aspartame and gas vinyl chloride, which is released by the plastic. However, all these assumptions (which is brain cancer) remain scientifically unproven.

Brain cancer symptoms and its diagnosis

These symptoms may indicate the development of other, less dangerous diseases, so many people for a long time ignore many of these symptoms or treated quite other diseases, while cancer, the disease progresses rapidly.

For the diagnosis of brain cancer used magnetic resonance imaging and computed tomography. But finally determine the nature of tumor (benign or malignant), as well as its type only after the biopsy of the tumor tissues.

In the treatment of brain cancer used such methods:

Treatment of brain cancer surgery is the most effective to date. However, operations on the brain even at the earliest stage of cancer is not always possible (for example, if tumors are located in vital areasbrain), since the surgical intervention in the brain on some sites with very high probability will lead to death or disability. Besides, already in the third stage of brain cancer most tumors grow so that they become inoperable, and in the fourth stage of brain cancer, when metastasis began to talk about surgery makes no sense. 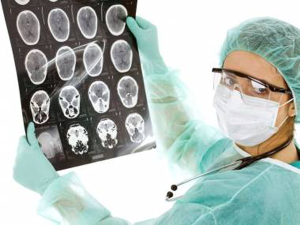 Radiation therapy is used as an auxiliary method in the surgical treatment method or as an independent method. Radiation therapy is the irradiation of the tumor, recurrence of tumor, of a tumor bed after surgery or metastases of the ionizing radiation that destroys malignant cells. The size of a single dose of radiation, number of sessions and courses is determined depending on the stage of the malignant process, the type of tumor and many other factors.

Radiosurgery is based on the same principle as radiotherapy. When radiosurgery is a high precision irradiation of the tumor with high doses of ionizing radiation. When brain tumors are of small size (1-2 stages of cancer radiosurgery shows good results.

Chemotherapy is most effective in combination with surgical treatment and radiation therapy. If you hold a surgical removal of the tumor for any reasons it is impossible, chemotherapy is combined with radiation therapy in several long courses of 1-3 weeks. It uses antimetabolites, synthetic and semisynthetic substances, antibioticsa antibiotics. Against each type of tumor of the brain is used your drug (however, not all types of tumors, these drugs are invented). Before chemotherapy, conducted a special analysis to determine if the medicine through the blood-brain barrier of the patient (the blood-brain barrier is a natural barrier that protects the brain from penetration of foreign substances, which in many cases makes it impossible for chemotherapy).

Cryotherapy for cancer of the brain used in cases when the tumor cannot be removed surgically (because of its location in a vital area of the brain or due to its large size) or for treatment of metastases. Cryosurgery is used in combination with surgery, chemotherapy and radiation treatment.