Glandular cancer (adenocarcinoma) refers to those types of epithelial tumors that affect organs that have glandular structure and the mucous membranes. These malignant tumors have some resemblance to adenoma, which is explained by the fact that they belong to differentiated cancer. The cells of the glandular epithelium is in almost every internal organ, so cancer may develop in any of them, in some cases, the tumor tissue start to produce your secret, as do the tissues of the affected organ.

Often glandular cancer is detected in those organs where most of the glandular cells or mucous membranes. These include:

Glandular cancer is one of the most common types of tumors of the stomach. According to statistics, gastric cancer is the most common type of cancer, so adenocarcinoma can also be considered very common. From this type of tumors in the year killed about 400,000 people, which is associated primarily with late detection of the tumor.

It is believed that the glandular stomach cancer often affects men than women, which may be associated with the culture of power, great contact with potential occupational hazards. Virtually all patients during the progression of the disease appear metastases in the immediate, which affects the regional lymph nodes, and separated, detected in almost all internal organs.

The main factors causing the development of tumors, include:

In addition, it was shown that, often, stomach cancer develops after surgical interventions in this organ, as resection of part of the body eventually leads to chronic reflux-gastritis. In most cases, cancer is preceded by other diseases of the digestive tract, such as gastritis. Some experts also believe that this disease may be of infectious origin, as indicated by studies in closed communities of Nigeria, where the incidence is ten times higher than the national average.

The main problem of gastric cancer is that in its early stages it has no clearly defined clinical picture. Sometimes the patient may complain of dyspepsia and loss of appetite, which can also be caused by many other factors why such symptoms one doesn't pay special attention. After some time there is early satiety and feeling of fullness even after a small amount of the ingested food. In the later stages of the disease the patient may experience vomiting of food eaten several days before the appearance of symptoms. Usually a patient goes to the doctor only if you experience bloody vomiting, severe nausea, inability to take food.

Treatment patients are assigned mainly surgical, as in glandular stomach cancer chemotherapy (and radiotherapy) is mainly of auxiliary nature. In addition, resection of the stomach allows to get rid of some unpleasant symptoms, e.g. pain and bleeding.

This type of cancer is a malignant tumor that develops in the mammary glands. By the predisposing factors include early puberty, genetic predisposition, late onset of menopause, extra weight,unfavorable environmental conditions, presence of harmful habits.

For a disease such as glandular breast cancer, the most common symptoms are: 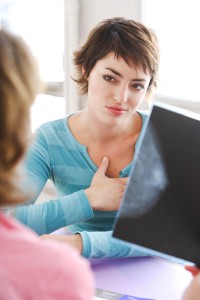 Detection of any of these symptoms should be a cause for increased concern, especially when there are concomitant factors. This is especially true of women after 30 years, but in some cases, breast cancer can occur even in men.

In the initial stages of almost any symptoms of tumor development there is no reason why all women are encouraged to put mammalogy at least 1 time per year. It is very important monitor the state of the chest in the dynamics, as the doctor sometimes may not appreciate at first glance, what is for women the norm and what isn't, which can lead to false diagnoses.

Modern medicine gradually mastered the methods of treatment of breast cancer, but still cancer ferrous rents too high mortality, which is associated primarily with late diagnosis. Early detection of tumors offers a chance for successful treatment more than 90% of cases, whereas in later stages this number does not exceed 5-10%. Usually advised surgical removal of the tumor, but with the wide spread of possible, and the removal of the entire breast, it all depends on the area in which it is possible to find cancer cells. Glandular cancer is quite aggressive, so patients should also be responsible and self-monitoring.

At present, lung cancer is the leading frequency distribution in the CIS countries. And found that men suffer about 10 times more often than women and the incidence increases proportionally with age (70 years a chance to have the cancer is 50-60 times higher than 40 years).

The main precipitating factor in the development of glandular lung cancer is Smoking, because tobacco smoke contains a huge number of carcinogens. Years of daily exposure to these harmful substances on the epithelium of the bronchi causes a disruption of its structure and functions, which provokes the formation of a tumor.

About 90% of smokers eventually "meet" with lung cancer, and the mortality among them is higher than among non-smokers. The likelihood of developing a tumor is proportional to the number of cigarettes per day and overall experience of Smoking. If we are to give up Smoking there is no way it is better not to finish Smoking cigarettes to the end, as it was in the last third contains the maximum amount of harmful substances.

In addition, the causes of lung cancer can be attributed to poor environmental conditions in cities, as well as "harmful and hazardous to health work. Private and long-lasting infections of the upper respiratory tract are also contributing factors, as pathogenic microorganisms also cause disruption of the epithelium. Glandular lung cancer usually develops relatively slowly, but it is prone to early metastasis. 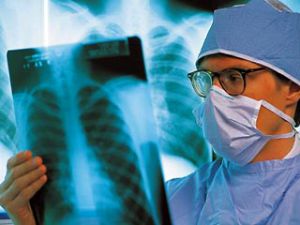 To identify lung cancer at an early stage is very difficult, since this disease is characterized by a wide variety of clinical manifestations. They largely depend on the overall health of the person and the presence of other comorbidities, like cancer can cause an aggravation practically any of chronic process.

The first two stages are characterized by cancer is the only manifestation of the tumor on x-ray pictures while the patient is still not notice any pathological symptoms.

At this time there may be complaints of increasedfatigue, drowsiness, lack of interest in life, but these symptoms can testify about dozens of other pathologies. Over time, it causes cough, hemoptysis, chest pain, shortness of breath, frequently detected recurrent pneumonia, treatment which is often ineffective.

Therapy of this disease should begin immediately after detection of first symptoms and the survey, which will help to establish an accurate diagnosis. Without proper treatment, only 1 % patients had survived more than 5 years.

Modern medicine for the treatment of lung cancer offers all the known methods – chemotherapy, radiotherapy, surgery and combined treatment. Conservative methods are inferior in the effectiveness of surgical, but of their advantages is that they can be used to treat larger number of patients.