Home / Metastases / What is the possible treatment of bone metastases?

What is the possible treatment of bone metastases?

Malignant tumors have one feature – the ability to metastasize. Cells of malignant tumors acquire the ability to move as a result of weakening of intercellular contacts and the linkage between cells and matrix. In a liquid medium metastases remain viable. They produce enzymes, which then penetrate the walls of blood vessels. Then metastases can be localized in any organ, situated at the considerable distance from the tumor. Also, tumor cells have the ability to engraft in healthy tissues and carry out their reproduction.

The appearance of bone metastases

Malignant tumors frequently localize their metastases in the skeletal system. Bone metastases provoke rebuilding of healthy tissue. With the participation of osteoblasts and osteoclasts is bone resorption (resorption) and new education. The cells of some tumors produce substances that stimulate bone destruction, leading to infringement of impellent functions of the skeletal system. The patient is experiencing severe pain and fractures.

Almost all tumors of epithelial nature give metastases to the skeletal system. Most often tumors of the breast, lung, kidney, prostate and thyroid glands. These types of cancer can metastasize to the skeletal system, even in the early stages of tumor development. Multiple myeloma is also able to metastasize at an early stage. Most often localized metastases in the pelvis, spine, ribs and skull. These metastases can wear osteolytic, osteoblastic or mixed.

Metastases to bone may have complications. One of the most serious complications is hypercalcemia (increased calcium levels in plasma). It occurs due to bone resorption. When this complication nausea, vomiting, drowsiness, weakness, feeling of thirst, disturbed orientation.

There may be pain in the bones, and perhaps the appearance of seals, which is easily detected by palpation (feeling). Early diagnosis is practically impossible, because the same symptoms can occur in trauma or hypothermia. If metastasis in the spine there is pain in spine, possible compression of the spinal cord, which appear to be a problem in urination, numbness of the limbs and in the abdomen. If hypercalcemia occurs, the disease accompanied by symptoms of this complication.

Localized metastases in different parts of the body, but most often affects the spine. Patients who were diagnosed with malignant tumor are at risk of appearance of metastases in other organs. In this case, prevention of metastasis is the constant monitoring by the doctor, who is under permanent observation of the patient is able to diagnose metastasis at an early stage. Diagnosis of bone metastases at an early stage helps to take measures for treatment of the patient. 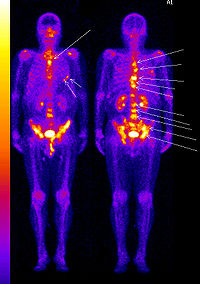 Competent diagnosis is very important in the development of metastasis. Examination of the bones for metastases is performed using scintigraphy (a diagnostic method, in which the body is injected with radioactive isotopes, which due to its two-dimensional radiation image). Scintigraphy of the whole skeleton makes the study of bone metastases is highly efficient, as it allowsto diagnose metastasis at early stages and to detect any metastases in the bones of the body.

Conventional x-ray examination of the organism is ineffective in the diagnosis of early stages of the formation of metastases, because it is able to identify Mature metastases in advanced stage of bone destruction (50%).

At an early stage of metabolic destruction of the only start that gives you the opportunity to prevent their further development. In this regard, early diagnosis can improve treatment, to improve the quality of life of patients and improve the survival of patients.

Upon detection of a malignant tumor in the body of the patient should not despair. At the present stage of development of medicine the treatment is carried out in various ways. This may be surgery, chemotherapy, therapeutic methods of treatment or radiological. With the help of all these treatments significantly increased the probability of recovery of the patient.

However, the treatment is quite complex and lengthy. Treatment of metastases in the bones and tumors in which they were formed, performed as follows:

The primary goal of treatment is to stop the uncontrolled cell growth of the malignancy. There are several options of how to treat the bone metastases, however, they require prolonged use. Importantly, patients should not lose heart, because every day appear new and new methods of treatment.